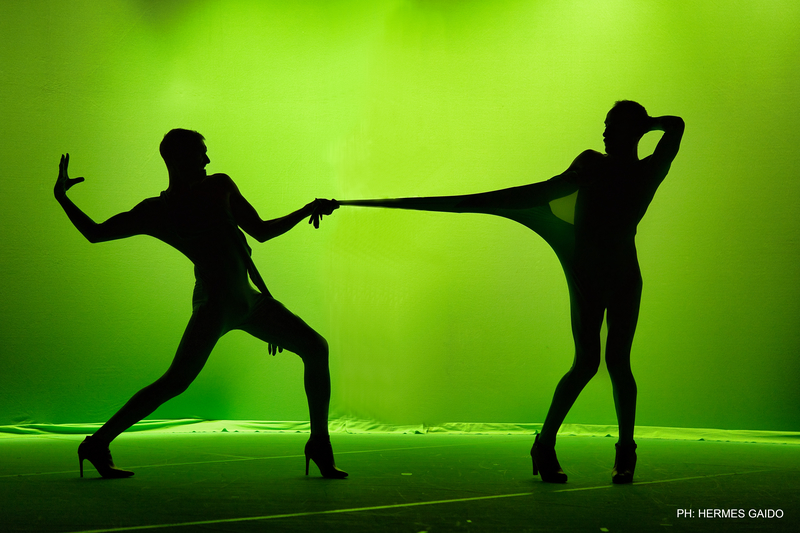 Premiere of Dystopia at the Théâtre du Rond Point

See the show at the Théâtre du Rond Point. Although it is a kind of continuity of Un Poyo Rojo, this time you will be immersed in the world of a recording studio and get a taste of a most delirious future.

Born in 2008 in a suburb of Buenos Aires, a triumph in more than thirty countries in fifteen years of intensive touring, the physico-comic feat of Un Poyo Rojo has set the Rond-Point on fire from 2016 to 2021. A hilarious sado-maso ballet, a jewel of extreme freedom, an irresistible distortion of male patterns, Un Poyo Rojo continues with Dystopia. The sportsmen's locker room gives way to a recording studio. With sensors, green screen, video, interactivity and other multimedia tools of the new technologies, two presenters draw the portrait of a sanitized world, with a padded perfection. But the human contradictions, the worst failings, end up invading the bodies, the movements and the stage. Dystopia unleashes its power of muscular humour, defusing the fright of the most delirious futuristic visions with laughter.

Dystopia is a show that was conceived on the road, in airports, train stations, in the hotel rooms of this never-ending international tour. The distance and this nomadic life have strengthened a specific link with social networks and news channels to stay tuned to the sounds of the world, especially those of Argentina, where the three artists, Alfonso Barón, Hermes Gaido and Luciano Rosso are from. This flow of information of different qualities and different natures is the starting point and the primary material of this new creation. Since 2008 society has evolved, the places of tension have multiplied and shifted, the claims and oppositions are stronger and often fall into excesses and postures that are excellent material for work, because it gives to think, to think the world. The objective of this show is to summon these points of tension in order to defuse them through laughter. One of the foundations of the company remains impertinence and it will also be applied in this new project. We will evoke futuristic projections that are both staggering and amusing and whose accumulation will feed our narrative.

Pssit... we want to share with you the words of HERMES GAIDO collected by Pierre Notte "Laug

Your name will be on the list at the entrance.